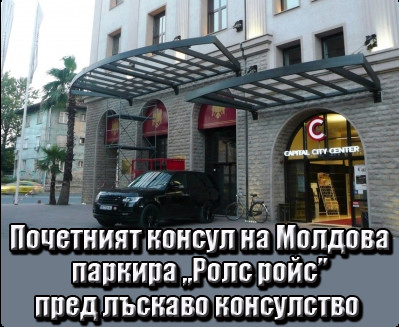 Among the shiny cars and luxury at the Capital City Center, the building of the Honorary Consulate of Moldova in Plovdiv also shined. Near the central entrance of one of the most famous business buildings in the city of the seven hills are placed lavish panes with the coat of arms of Moldova.

In addition to the façade also steel structures are built, resembling shades; posters in Bulgarian, Moldavian and English are also placed.

By decision of the Council of Ministers from September 2015, the businessman Veselin Chipev was elected for an Honorary Consul. He is the owner and executive director of several commercial companies, including the building of the Capital City Center - Outsourcing and IT Center in Plovdiv. He recently acquired a building on the Mendeleev blvd., next to the Kolodruma Sports Hall.

A typical view of the business center's parking lot are the shiny cars, including the Rolls-Royce with government numbers of the Moldova's Honorary Consul. The Honorary Consulate of Moldova with an information center is expected to open officially in the very near future, where it is possible to find up-to-date information about the political, cultural, economic life, rules for doing business in Moldova, Moldovan-Bulgarian relations and news.