Moldova Is Grateful to a Prominent Plovdiv Citizen

The Honorary Consul of Moldova in Bulgaria PhD. Eng. Veselin Chipev has received a special letter from the Moldovan Deputy Prime Minister and Minister of Foreign Affairs Andrei Galbur. In this letter he thanked him for his valuable contribution to the people of Moldova in efforts to overcome the damage caused by the great snowfalls that led to serious disasters in the country in April this year. 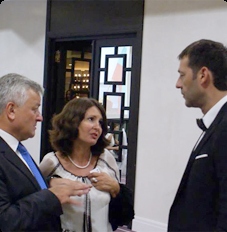 The letter expresses the satisfaction of the successful work of PhD. Eng. Chipev as an Honorary Consul. It is noted that the Foreign Ministry and the Embassy in Sofia hope for many years with his efforts to develop relations between Bulgaria and Moldova in a fruitful way for both nations.

"I am grateful to the Deputy Prime Minister for appreciating my work as an Honorary Consul in Bulgaria. I am a businessman; I am not used to be inactive. I am also trying to be a diplomat. Believe me, the relationships between Bulgaria and Moldova will not be just written on paper, we work hard to do real things," said PhD. Eng. Chipev to a reporter in Plovdivmedia at the Roman stadium on Friday. He was with his family on The DroneUp International Film Festival, which is held for the second year with his help.